More than four decades ago when Bro. Fortunatus Thanhäuser came to Kattappana the whole High-range region of the present Idukki district, Kerala, was still a very remote area. The nearest hospital was 110 kilometers away. Patients could not be transported there in time due to lack of proper roads. Most of the serious patients died on the way. Malaria also took the lives of many. The Vincent de Paul Society and the Franciscan Clarist Sisters of Kattappana were trying their best to start at least a small dispensary. Knowing the situation Mar Mathew Kavukatt, the Archbishop of Changanacherry, invited Bro. Fortunatus Thanhäuser from Germany, and Kattappana was selected as the suitable place for the foundation. The Archbishop entrusted Fr. Joseph Meprakarot, the parish priest of Kattappana, with the responsibility to take the necessary steps.

With the help of the Brothers in Germany Fr. Joseph bought a plot of land for Brothers, at Kumbukkal, near the parish church, in 1967 and a dispensary was started on 8th December 1968. The temporary dispensary was necessary to get the import license for the hospital equipment provided from Germany, and to get visa for the German Brothers (given only for an existing hospital). Dr. Xavier Kurian Mappilasserry, who visited the dispensary thrice a week from St. Augustine’s Hospital at Kumily and five Sisters of the Franciscan Clarist Congregation were attending to the needs of the patients. Later the facility was shifted to a new building with 18 beds, where very often 30-40 patients had to be admitted!

Later the parish priest arranged for the purchase of more land, where the present hospital is situated, and took all necessary steps for the construction of a hospital. Finally, the foundation stone for the new hospital was laid by Mar Mathew Kavukatt, the Archbishop of Changanacherry, on 27 June 1968.

The first building of the present St. John's Hospital, the A-Block, with 60 beds, was inaugurated on 1 February 1971. Twenty-two patients were shifted to the hospital from the temporary dispensary at Kumbukkal. An 8-year-old boy was the first patient. There were 3 doctors, 3 Brothers as nurses, 9 Sisters from the Clarist Convent and one lay auxiliary nurse. The hospital was very successful from the first day. The very next day, on 2 February, the first child was born and the following day he was baptized as ‘John of God’. On the second day itself the number of in-patients increased to 40 and the following day the available iron beds became insufficient and wooden cots were brought in from the dispensary.

The pioneers had to overcome extremely difficult situations. There was no electricity in the area, and telephone service too was unheard of. In the early 70’s there was a severe scarcity of cement which delayed the construction process. They were also hard-pressed for the necessary funds to procure hospital equipment and facilities. In spite of all these adversities, the hospital flourished and could render modern medical care to a large section of the population. First qualified staff nurses (GNM) joined the Hospital in November/December 1978.

The first building of the present St. John's Hospital, the A-Block, with 60 beds, was inaugurated on 1 February 1971. The B-Block was completed and blessed on 1.6.1975 by the Archbishop of Changanacherry. The C-Block, (ground floor: the present Paediatric Ward/Male Medical, & first floor: present Male Surgical/Ophthalmic O.T. Section) was completed in September 1976 and patients were shifted to it. But the official blessing took place only on 8 February 1977, by Mar Joseph Powathil, the Auxiliary bishop of Changanacherry.

The Eye Block comprising the OPD and wards, the construction of which was funded by Christoffel Blinden Mission (CBM), was inaugurated on 28th February 1988 by CBM Regional Representative, Dr. Julius Karunakaran.

The Cardiology Block was blessed by Mar Mathew Vattakuzhy, Bishop of Kanjirappally, and inaugurated by Sri. V.T. Sebastian, on 28th March 1993.

The St. Joseph’s Block was inaugurated by Bro. Andreas Hellermann on 5th September 1999.

The Blessing and laying of the foundation stone of Christu Jayanthi Memorial Block was on 4 January 1999. On 16th February 2001 the new block was blessed by Mar. Mathew Vattakuzhi, Bishop of Kanjirapally and inaugurated by Dr. Cyriac Thomas, Vice-Chancellor of Mahatma Gandhi University, Kottayam, during a colourful function attended by local and visiting dignitaries. (This block houses the General OT Complex with centralized AC and gas supply, the Department of Radiology, Department of Cardiology, Dialisis units, the laboratories, Central Sterilization, and other ancillary facilities). 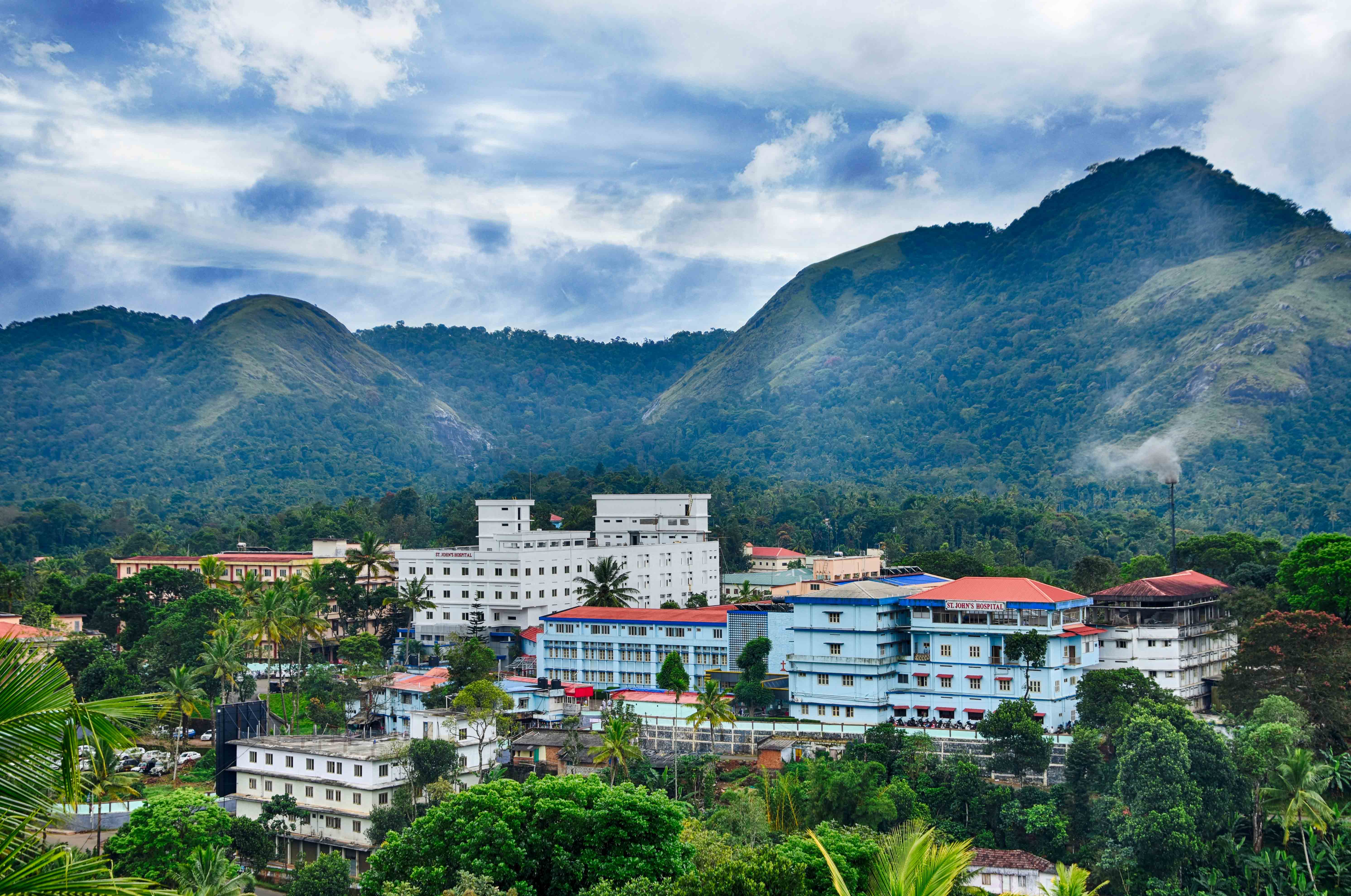 St. John’s Hospital at Kattappana after 45 years of its establishment is the main hospital in the High-range. It is a 450-bed, multi-speciality hospital having state-of-the-art facilities, serving as a tertiary care and referral centre for the whole of Idukki district and the adjoining places of Theni district of the state of Tamil Nadu.

(a) St. John’s School of Nursing

The need to prepare quality nursing professionals who would consider nursing as a vocation and devote themselves to the care of the sick in the spirit of St. John of God had been felt from the early stage of the development of the hospital. Thus the St. John's School of Nursing offering the Diploma in General Nursing and Midwifery was started in 1982 with the minimum facilities. Then, on 9 September 1984 new buildings (‘Old Nursing School’) and facilities were established. The blessing and inauguration was done by Mar Joseph Powathil, the then Bishop of Kanjirapally.

The present school and hostel were blessed on 26 February 1998 by Mar Mathew Vattakuzhy. Mr. P.J. Joseph, the Honourable Minister of Education, inaugurated the function.

As the 25th batch of students began their classes in October 2005, the year 2006 was the Silver Jubilee Year of the School of Nursing.

The Hospital Director is also the director of the School of Nursing.

(b) St. John’s College of Nursing

The St. John's College of Nursing was started in 2003, with an intake of 50 students per year, and is affiliated to Mahatma Gandhi University at Kottayam in Kerala. It offers a 4-year degree course in nursing (Bachelor of Science in Nursing). Mrs. Ann Mary Jacob is the first principal of the college.

It was started in 2014 with an yearly intake of 30 students.

(d) Pharmacy Course was started in 2016 with an yearly intake of 50 students.

From the inception of the Hospital, the Brothers have been interested in providing the surrounding community with health care through various outreach programmes. The Mobile Eye Service through regular eye camps with the help of Christoffel Blinden Mission (CBM) and in association with the District Blindness Control Society and local NGO’s provides eye health care to the remote areas of the District. Those who require cataract surgery are brought to the base hospital and treated free. Blood group detection camps and other medical camps too are arranged according to local demand.